Jesse Rogers Memorial Cemetery is located on the south side of Highway 98 in Mary Esther, Florida, a block west of Mary Esther Cutoff, at the traffic light for the Target Shopping Center. 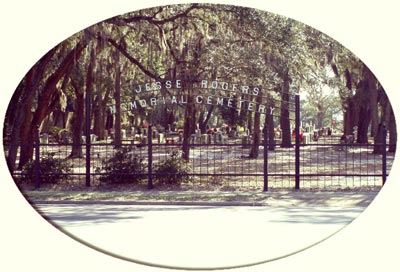 In 1977 the property was deeded to the City for maintenance and administration. There are numerous old graves, such as one from 1885 of Peter Green, born in 1826 in Nova Scotia. His tombstone reads "Free from care and sin and sorrow, Doubts and fears all passed away. No more night of pain and anguish, but one bright eternal day." Another of an infant, Lela Sikes, born in late 1898 and died the following July 4th, reads "A little time on earth she spent, till God for her His angel sent."

An article in the May 25, 1980 Playground Daily News sheds some light on this historic resting place. It described the beautiful cemetery then as "Guarded by tall cypress trees, moss-draped oaks and the waters of Santa Rosa Sound," which still reflects the locale today. A wrought iron fence was added along the northern edge in the 1990s to separate the cemetery from the bustling traffic along U.S. Highway 98.

Jesse Rogers, whose name the cemetery bears, settled along the Santa Rosa Sound in Mary Esther around 1840 with his family and a herd of cattle. The land was "so wild that bonfires were kept burning at night to keep the black bears from devouring the family's pigs." He was in his late 80s when he died in 1888, and was originally buried in a wooded spot that he had chosen near where Hollywood Boulevard and Mary Esther Boulevard intersect. Often referred to as a pirate with a legendary treasure booty, his gravesite was frequented by those hoping to find a fortune. His grandson, J.V. Rogers, quietly moved his remains one night to the old Mary Esther burial ground in an unmarked spot. A group of his descendants later named the cemetery after him.

The City charges a fee of $50 for the internment of a cremation or for a regular burial. This fee is for the grave site being marked and updating burial records. No interment may be made without providing prior notice to the City.

Note: The city does not provide gravesite services, funeral arrangements, opening of grave spaces or services for headstones and markers. You must contract with a funeral, mortuary, or monument company for these services.

Visitation is from sunrise to sunset, and all are encouraged to be respectful in this sanctuary.